In the territory studied, annual attack rates grew continuously from 1987 to 1991 and stabilized in 1992. Attack rates were highly variable both among and within texture/drainage classes. While there are differences in attack rates among drainage classes, these are mainly noticeable on sites with medium-texture soils. On such sites, rates and number of years of attack were higher for poorly drained than for well drained sites. However, once the weevil is established in a plantation, populations grow on both types of site. Plantations on the best sites were the least affected by weevils. For plantations characterized by edge effect, attack rates were higher in those parts subject to edge effect that in the rest of the plantation. The insects developed best on well drained soils, where they achieved the highest weights. The edge effect did not affect the weight of newly emerged adults. The number of insects emerging per shoot was not affected by site characteristics. 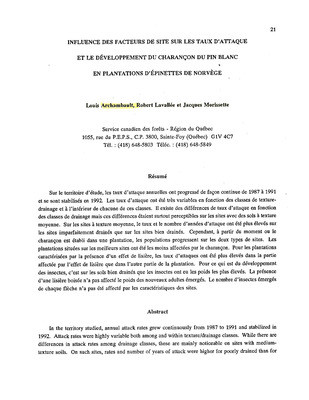