Use of rooted cuttings in reforestation. A review of opportunities, problems and activities. 1977. Brix, H.; van den Driessche, R. Government of Canada. Department of the Environment. Canadian Forest Service, Pacific Forest Research Centre, Victoria, BC. Joint Report No. 06, co-published by the BC Ministry of Forests. 16 p.

Physiology of maturation in woody plants is discussed in relation to the desirability of retaining juvenility, which generally confers higher rooting potential and growth rates on cuttings. Reforestation with rooted cuttings allows retention of both additive and non-additive gene effects of selected trees, whereas the additive effect is retained only in sexual reproduction. For many species, this advantage must be set against a possible decrease in growth rate, because of tree maturation and a poor growth form; also, production costs for rooted cuttings are generally higher than for seedlings. A reforestation program with rooted cuttings could take at least 10 years from initiation to large-scale field use.

Reforestation with rooted cuttings has been common in Japan for centuries and has comprised 120 million Cryptomeria plants in 1966/67. A million spruce rooted-cuttings are produced annually in West Germany from selected clones, and a similar program has been started in Finland. Relevant research has been undertaken in other countries, notably New Zealand and Australia.

Reforestation in British Columbia with rooted cuttings is discussed for Douglas-fir, western hemlock, white spruce, lodgepole pine, Sitka spruce and yellow cedar. Possible advantages are that rooted cuttings can be used when availability and quality of seed becomes critical (yellow cedar), and results from tree improvement programs can be utilized more quickly in cases where seed production in seed orchards is slow (Douglas-fir, western hemlock, Sitka spruce). The long-term incentive depends on the importance of non-additive genetic inheritance and only scant information on this is available for two species (Douglas-fir and western hemlock). A major disadvantage could result from a decrease in growth potential with tree maturation, but this, together with possible means of overcoming it, have not been studied for the British Columbia species. 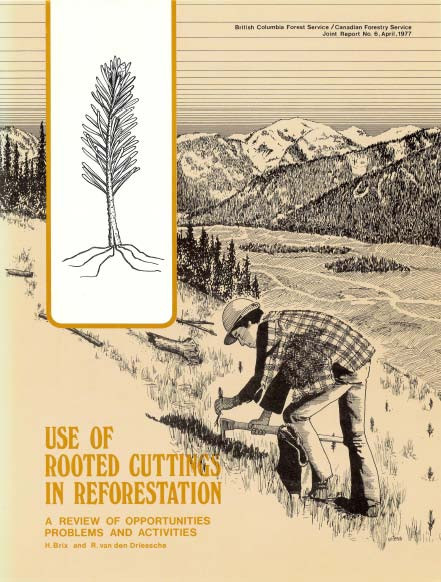