In selectively cut and undisturbed parts of four mature stands, five 0.04-ha plots were established, and trees were measured, mapped, and examined for aboveground symptoms of armillaria root disease. Trees were felled, and stumps and their root systems were removed by an excavator and were measured and examined for Armillaria lesions. Isolates from root lesions, rhizomorphs associated with lesions, and basidiomes collected in or adjacent to plots were of Armillaria ostoyae (Romagn.) Herink. All trees were assigned to one of five tree condition classes based on the location of lesions and host response. The merchantable volume in each class was calculated. In undisturbed plots, incidence of trees with A. ostoyae lesions on roots was about 10% in the dry climatic region compared with about 75% in the moist region and 35% in the wet region. In plots in the selectively cut parts of the stands, 50-100% of stumps were colonized by A. ostoyae. Results of a logistic regression analysis showed that selective cutting was associated with a statistically significant increase in the probability of a tree having A. ostoyae lesions, where the magnitude of the increase in the proportion of primary roots with lesions and the average number of lesions per diseased tree; however, the increases in disease intensity were statistically significant at only two (one dry and one moist) of the four sites. The percentage of merchantable volume threatened or killed by A. ostoyae was usually higher in cutover than undisturbed plots. 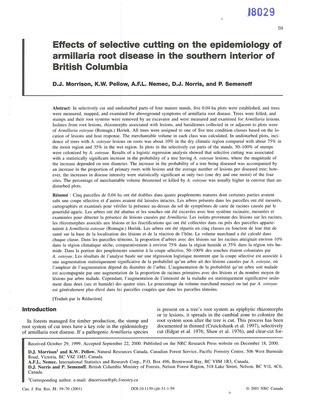