Three 20 ha plots of Douglas-fir trees infested with five instar larvae of Choristoneura occidentalis were aerially treated at a rate of 750 billion polyhedra/ha with a nuclear polyhedrosis virus which had been propagated in C. fumiferana. At 15 days post-spray, NPV infection levels were 25, 55 and 87% and population reductions owing to treatment were 0, 26 and 48%. Moth emergence was lower in treated plots and the male:female ratio was 2:1 in treated plots compared to 1:1 in check plots.

Four 40 ha plots were similarly treated with Bacillus thuringiensis at a rate of 20 BIU/ha. At 15 days post-spray, population reductions owing to treatment were 32, 66, 79 and 91%. The proportion of moths emerging and the number of eggs laid were similar to check plots. No consistent foliage protection was obtained with either treatment. 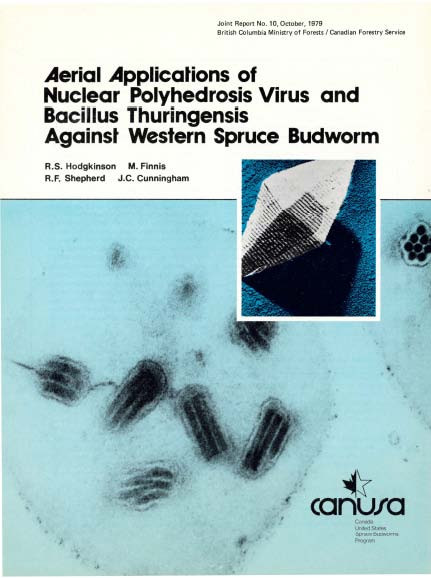