Concern about potential deterioration in forest health attributable to air pollution led to the establishment of the Acid Rain National Early Warning System (ARNEW) by Forestry Canada early in 1984. This network is designed to detect early signs of acid rain damage to Canada’s forests before damage became obvious. ARNEWS assesses the health of the forest using a common set of measurements taken on permanent sample plots established by the Forest Insect and Disease Survey (FIDS) of Forestry Canada. The role of FIDS in ARNEWS is to identify forest damage that is not caused by other factors such as insects, disease, fire, weather, etc. Damage detected by FIDS that is not readily explainable becomes the subject of a research project to determine possible causes.

This report describes the health of 16 conifers and 9 hardwoods, species that have a wide range and represent the greater part of the forests of Canada. Based on the results of the monitoring to date, there appears to be no evidence of large-scale decline in the health of Canadian forests. Searches were made for the classic symptoms of air pollution, but little evidence was found of any damage caused by pollution. Furthermore, this assessment of the health of Canadian forests shows that mortality was generally in the normal range of 1-2% and was attributable to stresses from competition, drought, and windstorms. In the few situations in which these figures were exceeded, causes of mortality were apparent. 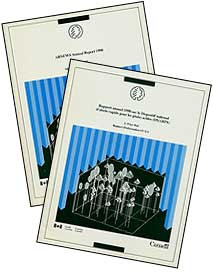