Exotic pests are defined as flora and fauna species extending beyond their natural range of potential dispersal, that are having a combination of negative economic, ecological or social impacts. The steps involved in an exotic invasion are introduction, establishment and spread. Not all exotic species that successfully establish and spread are pests. Indeed, exotics are an integral component of the North American economy and ecology; over 90 percent of North American food and feed production is derived from intentionally introduced exotic species. The probability of an exotic species becoming a pest is quite low. Successful establishment of an introduced organism into non-native habitat depends upon a complex interaction of several factors, including size of the introduction, adaptability of the organism, habitat suitability and the level of competition (predation, diseases, etc.). Although the likelihood of successful exotic spread is low, certain exotics that do become pests can have major negative impacts. It is estimated that over 300 tree-feeding insects native to Europe are now established in North America. A comprehensive US study estimates the total number of introduced species in the US exceeds 4542 and that 15 percent of these exotics cause severe harm in agriculture, forestry, industry, human health and to protected natural areas. The financial impact of alien forest pests in the US has been estimated at US$ 123 billion per year and annual timber losses at US$ 4 billion. While there are few impact studies in Canada, annual domestic timber losses to all forest pests (both exotic and indigenous) are an estimated 61 million m3 or about one-third of the total annual commercial harvest. Allowing that this timber would have been harvested, the annual financial loss to provincial stumpage, royalties, and rent revenues is about $720 million. Ecosystem impacts of exotic species include suppression and replacement of native species, potential for extirpation (e.g., American elm, American chestnut), and the threat to rare and endangered species. Ecosystems of low diversity, such as the boreal forests, are relatively more susceptible to exotic invasion. Stressed and depleted forests afford reduced food and habitat for wildlife, and have altered forest fundamentals which are manifested in nutrient cycle impacts, forest hydrology and forest fire regimes. The social effects of exotic pests can include impacts on human health, government credibility, losses in aesthetic and spiritual values, public perception and support of forestry, employment and community stability, and international relations. The magnitude and nature of international trade directly affect trends in exotic pests. The increase in trade volumes and the emergence of new trading partners serve to increase the risk of exotic transmission. This risk is further strengthened by the speed of modern transportation, the use of containers, point-to-point delivery with inter-modal transport, and the use of “green” packaging materials. Travel, another source of trade and exotic introductions, has expanded dramatically and now includes many previously isolated regions. Any importation of living or untreated material (water, soil, air, wood, people, etc.) constitutes a potential source for the introduction of exotic pests. Canada is particularly vulnerable to trade transmissions of potential exotic pests because the US, our major trading partner, is also the world’s largest importer. The risk is further compounded by a degree of ecosystem integration between the two countries. Exotic pests can and do produce situations in which export opportunities are threatened and lost. The control/eradication options for exotic pests are increasingly being limited or eliminated in response to improved information on efficacy, collateral damage to other organisms and the degree of public acceptance. The range of options includes baits and attractants, fumigants, repellants and barriers, traps, poisons, biological agents, bounties and commercial exploitation, and mechanical removal. Given increased incidence of exotic pests, the magnitude of the expected damages and the limitation on control options, central to the control of exotic pests is an effective international effort to reduce the transmission risk at the source of introduction. This will require international cooperation, funding to support the required implementation in emerging exporters, monitoring provisions and established penalties for violations. Canada has a number of natural barriers to domestic spread of exotic pests. These include climate, distances and topographical barriers. It is important that the institutional structure be reviewed to ensure that it is positioned to complement these natural barriers.

Also available under the title:
The potential impacts of exotic forest pests in North America: a synthesis of research. (English) 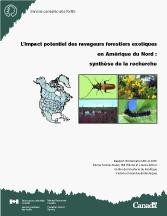