Gorse (Ulex europaeus L.) is a leguminous shrub native to western Europe and North Africa. During the past century it has greatly expanded its adventive range in Australia, New Zealand, Chile and Europe, and along the Pacific and Atlantic coasts of North America. In Canada, it is found in British Columbia (Vancouver, Vancouver Island, the Gulf Islands and Queen Charlotte Islands) where it is classed as a noxious weed. Gorse is also found from Virginia to Massachusetts on the east coast of North America. The shrub rapidly invades dry and disturbed areas, forming dense thickets that can suppress and inhibit native vegetation, including economically important conifer seedlings. It can occupy the same habitats as Scotch broom [Cytisus scoparius (L.) Link] but usually occurs on drier sites. Both of these legumes threaten native plant communities but U. europaeus persists longer and possesses conspicuous spines. Invasive characteristics of gorse include its evergreen habit, prolific seed production, longetivity of seeds in the soil and nitrogen fixation. Human activities such as agriculture and construction of logging roads have accelerated the spread of gorse in British Columbia, but there is still an historic opportunity to restrict the population expansion that this species has exhibited in many other countries. Various methods of control (chemical, manual, biological and integrated) are evaluated. 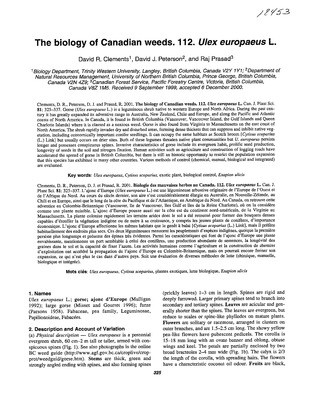