Incidence of attack and brood production by mountain pine beetle in lodgepole pine were assessed following a 600-ha controlled burn in Tweedsmuir Park in central British Columbia. The burn was conducted 20-23 September 1995. Varying levels of fire intensity resulted in various degrees of crown scorch and tree bole charring. Attack and brood production were assessed in five burn intensity classes in trees attacked prior to and following the burn. In trees attacked prior to the burn, brood density was significantly reduced in the two highest burn intensity classes compared to the other classes. On average, beetle production per tree in burned trees was reduced by 47.8% compared to trees with no evidence of bole charring and population increase in the burned area was reduced to a static level. The year following the fire, mean attack, egg gallery and brood density taken over all burn intensity classes were significantly lower than outside the burn. On average, attacks per tree and brood per tree were reduced by 48.5% and 56.5%, respectively. However, on a per attack basis brood survival in trees within the burn was similar to that in trees outside the burn. 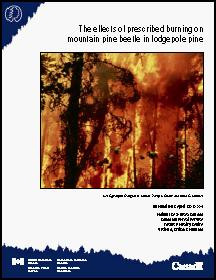