Two variants of a biophysical site index model were derived for two shade-tolerant boreal species (Abies balsamea [L.] Mill., and Picea mariana [Mill.] BSP), and two shade-intolerant boreal species (Populus tremuloides Michx., and Betula papyrifera Marsh.). The reduced model is based on the widely used assumption that the relationship between height and age of dominant trees depends solely on site properties: i.e., four climatic variables (degree-days, vapor pressure deficit, aridity index, and precipitation), and one edaphic variable (soil water-holding capacity). The full model is based on the further assumption that site index also depends on the stand successional stage represented by the dbh distribution index. The reduced model is accurate and unbiased for both intolerant species, but it becomes inaccurate and underestimates the mature stand dominant height for both tolerant species. The full model is equivalent to the reduced model for both intolerant species, but becomes two or three times more accurate and unbiased for both tolerant species. When incorporated into a growth and yield model as the site quality index, the reduced model performs as well as the traditional phytometric model(derived solely from an empirical fit of dominant height and age without any biophysical data) for both intolerant species, but it becomes biased for both tolerant species. By contrast, the full model, when used as a site quality index in the growth and yield model, is unbiased and equivalent to the phytometric model for the four species. These results show taht the site index of intolerant species can be solely associated with climatic and edaphic variables, but these variables have to be completed by the successional stage for correctly estimating the site index of the tolerant species. 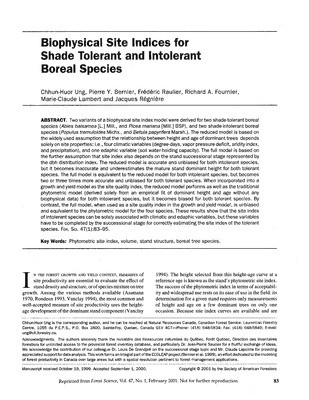