Regression equations describing the probability of detecting lodgepole pines infested by the mountain pine beetle (Dendroctonus ponderosae Hopkins) at different distances from a line were derived from thirty-six 50-m line transects. Each transect line was traversed independently by two cruisers at a normal walking pace, and all infested trees were counted. The distance of each tree from the line was then measured, and assigned to 2-m-wide strips parallel to the line to a maximum width of 20 m. Fixed plots centered on each line were established, enclosing all of the trees previously identified. All of the trees within the fixed plots were examined for attack in order to determine the rates of error and the precision of the line intersect cruises. Three prism plots were placed along each transect line to provide further comparisons and stand parameters. Based on the data, a histogram of the probability of detecting a currently infested tree over distance from the transect line (the detection curve) was constructed. Both a simple linear regression and a logistic regression gave a good fit to the data. Based on a linear relationship between the probability of detecting an infested tree and perpendicular distance from the transect line, the estimated density per ha (Â) of currently infested trees had the following form: Â = 10,000nb/La2, where n = number of currently infested trees seen, b and a are the slope and intercept of the detection curve, L = transect length (m). The estimate from this equation agreed closely with the corresponding estimates from prism plots and fixed plots and there were no significant differences among the corresponding overall densities. Both cruisers mistakenly tallied some trees from the transects that were not currently infested (commission error). The probability of commission errors was independent of infested tree density and distance from the transects. The method used in constructing the detection curve reduced the possible bias in the estimated density due to this problem. In practice, it is recommended that each person develop his or her own detection curve and equation for estimating the density of currently infested trees. 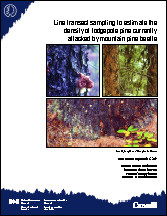