Zeiraphera canadensis Mut. & Free. (Lepidoptera: Tortricidae) is an early season folivore that feeds exclusively on young foliage of white spruce (Picea glauca (Moench) Voss). Most first-instar larvae are unable to colonize vigorous upper-crown apical buds due to the limited time during which newly burst buds are suitable to young larvae and the distinct acropetal bud development pattern exhibited by white spruce. However, late second- and early third-instar larvae abandon buds from the lower and middle crown and disperse to upper-crown apical buds once they become available for colonization. We carried out a 3-yr field study to test the hypothesis that "acropetal" dispersal by late second- and early third-instar Z. canadensis larvae through the crown of white spruce is an adaptive response to within-plant variability in foliage development. Survival and the size and developmental rate of survivors were highest when larvae developed on apical buds in the upper crown. Smaller buds located more proximally and/or lower in the crown declined in quality earlier than did the larger buds in the upper crown. Larvae that developed in buds with several conspecifics survived better, were larger, and developed faster than those tha developed alone. Intraspecific larval competition was evident only at the highest densities, where the entire apical bud unit was consumed. Individuals allowed to develop for two instars on buds from the lower crown before being transferred acropetally to complete development on apical buds once they became available, always survived better, were larger, and developed faster than nontransferred larvae, irrespective of initial bud position and/or larval density. In addition, acropetal dispersal did not increase the probability of mortality from Formica ants, the most common predators found foraging on young white spruce. Including the costs and benefits, associated with competition and predation, the performance of individuals that were restricted to developing within even the highest quality upper-crown apical buds (i.e., alternative strategy) was lower than for individuals that were allowed to feed twice on new foliage (i.e., the observed strategy). Thus, acropetal dispersal increases individual fitness in a heterogeneous environment where the quality and quantity of required plant resources varies spatially and temporally. 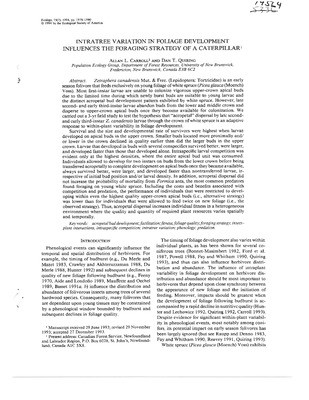