This report presents a descriptive analysis of attitudes and behaviors associated with public involvement in forest management in Alberta. Data were collected by mail survey in 1999 from two main groups; the general public and members of forest-industry public advisory groups (PAGs). The survey measured general levels of public interest in forest management, and determined the public's preferred forms of involvement. Sources of information, perceptions of the accuracy of those sources, and perceptions of organizational and community groups influence on forest management were also assessed. Results suggest that PAG members differ from the general public in terms of socioeconomic characteristics and in terms of attitudes and behaviors associated with public involvement. Furthermore, the findings illuminate two conditions with respect to public involvement. First, the respondents accessed a wide range of information about forest management and had distinct preferences for one source of information over another depending on their geographic location (urban or rural) and their degree of contact with the forest industry (PAG members or the general public). Second, the respondents strongly supported public involvement in general and clearly preferred citizens' committees as a specific mechanism for that involvement. Although the representativeness of PAGs is considered key to effective public involvement, the authors recommend moving beyond the profile of PAG members to evaluating the process within which their deliberations take place. 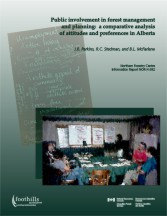