One of the most pronounced generalizations in macroecology is the positive interspecific relationship between the distribution and abundance of species. Understanding of this relationship comes in two forms: statistical descriptions and insight into the biological mechanisms. Several statistical and mathematical models have been used to describe, to summarize, to interpret, and to predict the positive relationship, e.g., the Poisson, negative binomial, Nachman’s, power, and logistic models. In this study we derive a three-parameter model of which others are special cases. The unified model describes how occupancy depends on the density and the spatial distribution of species. It is shown that the unified model can be generalized from the balance between the colonization and extinction processes of a metapopulation, which provides a mechanistic basis for the model. A maximum likelihood procedure is developed to estimate the parameters, and several occupancy-abundance models are applied to data on bird and tree species distributions. It is concluded that the general model gives the best fits to the two data sets although Nachman’s model is recommended for the bird species and the logistic model for the tree species because these models have only two parameters. We further discuss how to quantify occupancy-abundance patterns and to define species-area curves in terms of occurrence. 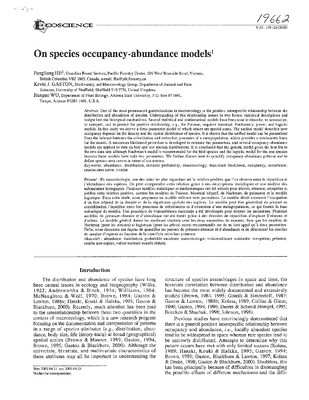