The virulence of Armillaria ostoyae isolates from coastal (16) and interior (33) British Columbia, elsewhere in North America (eight ) and Europe (six) was assessed on 2-year-old Douglas-fir seedlings in pots during a 3-year trial. Isolates from most geographical locations infected similar proportions of seedlings, had similar average damage scores and killed a similar percentage of diseased seedlings. Isolates from the coastal region had a significantly higher probability than interior isolates that a diseased seedling received a damage score > 3 on a 1-5 scale, and coastal isolates killed a higher proportion of diseased seedlings than interior isolates. The mean damage score for isolates that had been in culture for 20-25 years was about 25% lower than that for recently collected isolates. The results indicate that the higher incidence and longer duration of mortality in the southern interior of British Columbia compared to the coast can not be attributed to greater virulence of interior isolates of A. ostoyae. 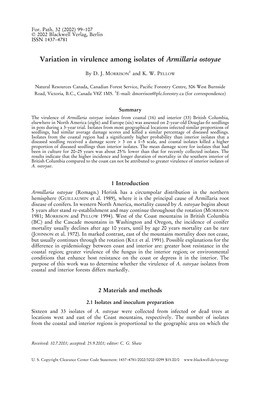