Collection of timber harvest data from federal lands was introduced by the former Dominion Forest Service (now Forestry Canada) in 1940. Since then, the data have been compiled by various components of Forestry Canada. Although internal records were kept, it was not until the 1971-72 fiscal year that the data were published.

Starting with the 1985-86 fiscal year, estimates of the stumpage revenue for the timber harvested from federal lands have been included in these reports.

The present report covers the fiscal year from April 1, 1987 to March 31, 1988. Historical comparisons with past years are also included. 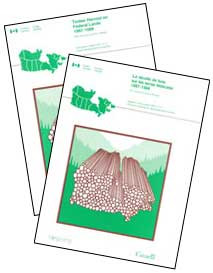