Phenotypic correlations between juvenile-mature wood density and growth were examined based on increment core samples from two plantation, a provenance test and a commercial plantation, of black spruce [Picea mariana (Mill.) B.S.P.]. The ring density components are significantly correlated to their respective ring width components: earlywood and ring densities are negatively correlated to ring and earlywood widths, respectively, while ring and latewood densities are positively correlated to latewood width. These hold true in both juvenile and mature wood. However, the correlation between ring width and ring density decreases with increasing age. This suggests that the correlation between wod density and growth rate tends to lessen as the tree ages. For each character, the correlation between juvenile and mature wood is significant but moderate. Thus, juvenile wood characters are only indicative of mature wood ones. On the other hand, trees with 12 growth rings from the pith were good predictors of wood density and radial growth of the whole tree. Individual growth rings from the juvenile-mature wood transition zone can be used to predict to some extent the wood density of either mature wood or the whole tree. 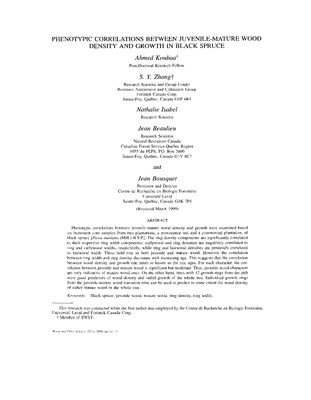