Butternut (Juglans cinerea L.) is a minor component of the temperate deciduous forest region of northeastern North America, but it is severely affected by the butternut canker (Sirococcus clavigignenti-juglandacearum Nair, Kostichka, and Kuntz) in the southern part of its natural range. Genetic diversity and population structure in as-yet unaffected or only slightly affected natural populations were evaluated at 12 isozyme loci. The genetic diversity estimates were low with values much below those estimated in other species of the same genus or in boreal tree species, with 25 and 13.9% polymorphic loci at the species and population levels, respectively; 1.3 and 2.3 alleles per locus and per polymorphic locus, respectively, at the species level; and an average observed heterozygosity of 0.028. Population differentiation was low, with the exception of one unique population. The implications for advanced conservation are discussed. 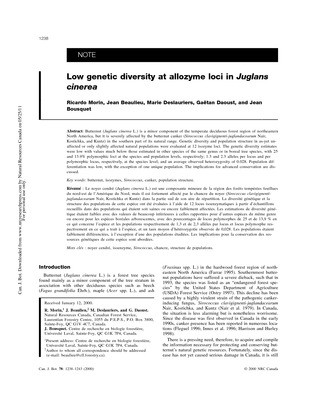