Tranosema rostrale (Brishke) (Hymenoptera, Ichneumonidae) and Actia interrupta Curran (Hymenoptera: Tachinidae) are the two endoparasitoids most frequently encountered in low-density populations of the spruce budworm, Choristoneura fumiferana (Clemens) (Lepidoptera, Tortricidae), in the Quebec City region. Monitoring of attack rates of implanted C. fumiferana larvae at two different study sites suggested the possible existence of competition between the two parasitoids, with A. interrupta seemingly displacing T. rostrale. Here, we show that multiparasitism involving these two species does occur in the field, but at a frequency too low to explain the seasonal pattern of decline in apparent parasitism by T. rostrale that accompanies the rise of A. interrupta attack rates. We also provide preliminary evidence, from laboratory experiments, that A. interrupta has a competitive advantage over T. rostrale and that the success of parasitism by A. interrupta may be enhanced by prior parasitism by T. rostrale under certain conditions, possibly due to the presence of the latter species' polydnavirus. In addition, we describe a PCR-based method that we developed to help detect the presence of T. rostrale eggs which often escape detection by simple visual examination of the dissected host larvae: DNA sequences specific to the polydnavirus injected by the female wasp at the time of oviposition can be readily amplified from whole host larvae. 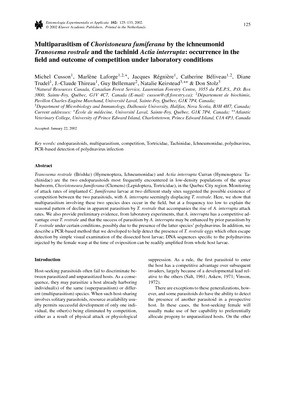