Over the last decade, individual genetic maps, based largely on RAPD markers, have been constructed for numerous conifer species. The information contained within such maps may be further enhanced if it can be synthesized into a single consensus map at the intra- or interspecific level. However, the development of such consensus maps is hampered by the difficulty in using the same RAPD markers in multiple populations or across closely related species. Thus, the aim of this study was to evaluate the potential of 39 sequence-tagged-site (STS) markers of arbitrary genes (PERRY & BOUSQUET 1998a) for use in genetic mapping at the intra- and interspecific levels. Several white spruce [Picea glauca (Moench) Voss] and black spruce [P. mariana (Mill.) B.S.P.] trees, belonging to different unrelated pedigrees for which genetic map development is anticipated, were selected. In cases where an STS marker appeared monomorphic on an agarose gel, it was investigated further for singlestrand conformation polymorphism (SSCP). By using SSCP in addition to standard agarose gel electrophoresis, the number of informative markers was increased from 10 to 22 in white spruce and from 14 to 19 in black spruce. The number of markers that were informative in both species was increased from 6 to 9. Mendelian segregation was verified for alleles at all loci that were polymorphic in either or both of the species. 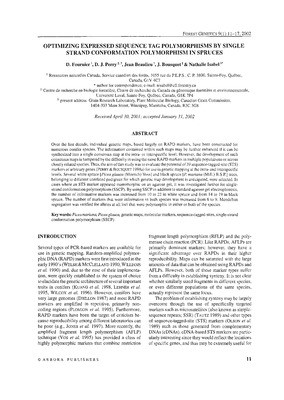