Controversy still exists over the adaptive nature of variation of enzyme loci. In conifers, random amplified polymorphic DNAs (RAPDs) represent a class of marker loci that is unlikely to fall within or be strongly linked to coding DNA. We have compared the genetic diversity in natural populations of black spruce [Picea mariana (Mill.) B.S.P.] using genotypic data at allozyme loci and RAPD loci as well as phenotypic data from inferred RAPD fingerprints. The genotypic data for both allozymes and RAPDs were obtained from at least six haploid megagametophytes for each of 75 sexually mature individuals distributed in five populations. Heterozygosities and population fixation indices were in complete agreement between allozyme loci and RAPD loci. In black spruce, it is more likely that the similar levels of variation detected at both enzyme and RAPD loci are due to such evolutionary forces as migration and the mating system, rather than to balancing selection and overdominance. Furthermore, we show that biased estimates of expected heterozygosity and among-population differentiation are obtained when using allele frequencies derived from dominant RAPD phenotypes. 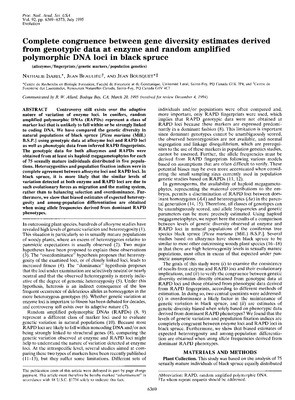