Studies on the biology and activity of the white pine weevil, Pissodes strobi (Peck) (Coleoptera: Curculionidae), a severe, deforming pest of several conifers, revealed that it was active in temperatures as low as 0.5' and emerged very early in spring and shortly thereafter mated and oviposited in the terminal leaders. We found the weevils emerging had turgid abdomens even before they had a chance to feed on the leaders suggesting that they might have fed on the roots underground. Such feeding would facilitate rapid mating and oviposition. If the terminal leaders are sprayed, early in spring, prior to weevil emergence with diflubenzuron, an insect growth regulator that inhibits chitin synthesis, near perfect control of the weevil can be achieved. The eggs laid by the female get coated with diflubenzuron either directly or indirectly, which is then absorbed into the developing embryo where it inhibits the synthesis of chitin resulting in a malformed integument. Such an embryo is unable to eclose and dies within the egg. We recommend applying diflubenzuron at the rate of ≥ 30 g/ha very early in spring when the snow is still on the ground making sure that the terminal leader is completely covered by the spray for preventing weevil damage. 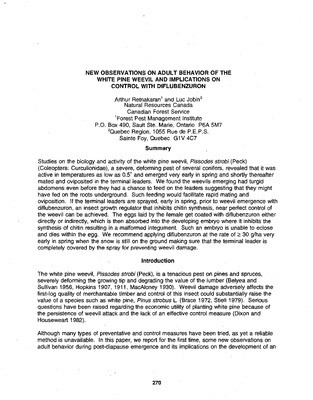