In an effort to influence public attitudes toward forest management, some forest companies have undertaken initiatives to inform the public of their activities and of the science involved in forest management. This study is an evaluation of the effectiveness of one of these initiatives: public tours of a company's mills and woodland operations. Sunpine Forest Products Ltd. of Sundre, Alberta, initiated a study in 2000 to determine if information and firsthand experience of forestry operations could influence public attitudes. A survey was administered during public tours in a before-and-after design. Although knowledge levels were greater among those who completed the survey after the tour, no substantive attitudinal differences were observed. Tour participants, who were primarily from communities near the Sunpine operations, were older and less educated than the general public of Alberta. Tour participants also had more favorable attitudes toward forest management than the general public. The results suggest that the tours attracted a limited segment of the public who had relatively positive views of forest management before participating. 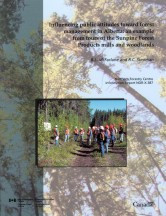