The spruce budworm (Choristoneura fumiferana) is one of the most destructive insect pests of North American conifers. Populations of spruce budworm have reached outbreak densities on a more or less regular basis over extensive forested areas for at least the past three centuries. The last outbreak in Quebec started in 1965, ended in the early 1990s, and caused timber losses equivalent to 10 years of harvesting by the forest industry. There is considerable concern that another outbreak is now developing.

The ability to predict the occurrence, duration and severity of defoliation caused by a spruce budworm outbreak would greatly enhance the capability of forest managers to minimize the impact of the insect on forest resources. The patterns of defoliation during the previous outbreak can provide important clues to the expected patterns of the next outbreak. 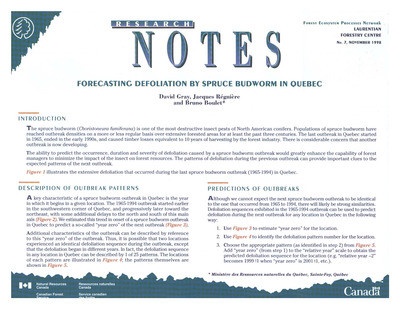