The predictions of three published models of temperature-dependent egg hatch of the European strain of the gypsy moth, Lymantria dispar L., were compared with observed hatch rates of caged egg masses in Victoria, British Columbia, Canada. Two of the three models gave a good fit to observations. Both of these models considered explicitly the period between oviposition in the summer of one year and hatch of neonates the following spring. When combined with models for temperature-dependent development of larvae and pupae, and adult longevity, the seasonal life history of an entire generation of gypsy moth could be simulated. These composite models predict the seasonal occurrence of all life stages of the insect. The simulated flight period of adult male gypsy moth on Vancouver Island in 1998 compared favourably with observed captures in pheromone traps. A series of gypsy moth generations was simulated using daily temperature inputs reconstructed from climatic normals (period 1961-1990) at various locations on the south coast and southern interior of British Columbia where gypsy moth has been frequently introduced but is not established. These simulations provided estimates of the probability of a persistent population resulting from a predicted stable seasonality of the gypsy moth. The highest probabilities of persistence were in coastal areas along the Strait of Georgia between Vancouver Island and the continental mainland and in southern interior valleys below approximately 500-m elevation (above sea level). Outside these regions, normal climatic profiles resulted in an unstable seasonality for gypsy moth with increasingly late oviposition dates, and subsequent problems in synchronizing initiation and completion of winter diapause with appropriate ambient conditions. The phenology models discussed here can be and were used as decision-support tools either to improve the efficiency of pest management operations (sampling, pesticide applications) or to make better decisions concerning the need for eradication of the gypsy moth in novel environments. 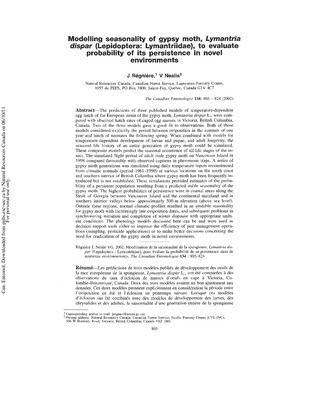