The frequency of egg parasitism in the spruce budworm, Choristoneura fumiferana (Clem.) (Lepidoptera: Tortricidae) by Trichogramma minutum Riley (Hymenoptera: Trichogrammatidae) was recorded in several host populations during the rising phase of an outbreak in the Gatineau Valley (Quebec, Canada) in 1999 and 2000. Some of the observed spruce budworm populations were subjected to experimental aerial applications of Bacillus thuringiensis var. kurstaki during the course of the study. Untreated spruce budworm population densities at the onset of the study were directly related to stand composition (the proportion of non-host basal area) but unrelated to plant species diversity. Much of the variation in budworm egg mass parasitism rates was accounted for (77.1% of total variance) by three variables: year, spruce budworm egg population density, and proportion of nonhost basal area in the stand. The exploitation of eggs within parasitised egg masses was related to year, B. thuringiensis treatment, egg mass size, and the proportion of egg masses parasitised in the host population (76.9% of variance). The yearly variation in parasitism rate was considerable, and was consistent with climatic conditions, namely heat accumulation and precipitation during the spruce budworm oviposition period. Parasitism by T. minutum on eggs of C. fumiferana was recorded in 16 additional sites in 2000, to confirm the general form of the inverse density dependence of parasitism. Observations recorded by Neilson in the Green River area of New Brunswick (Canada) between 1948 and 1957 are discussed in the context of the present analysis. These results indicate that parasitism by T. minutum may be more predictable than previously believed and may be an important and consistent source of mortality in the several years preceding an outbreak of C. fumiferana, especially in mixedwood stands and in warmer, drier portions of the spruce budworm’s range. 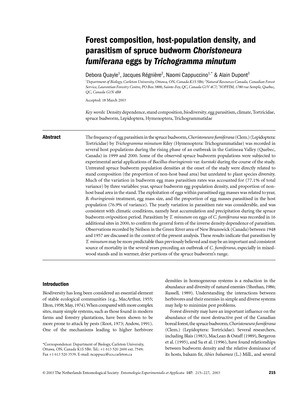