Boreal forests form Earth's largest terrestrial biome. they are rich in ecosystem and landscape diversity, though characterized by relatively few plant species, when compared to other forested regions. The long term viability and sustainability of boreal forests is influenced by many factors. They are subjected to interruptions at intervals by large-scale natural disturbances, and increasingly by human activities. Boreal ecosystem development is typically a slow process: hence, rapid changes in the global environment may invoke complex responses. Many industrial nations border, or lie within boreal regions, deriving much of their economic wealth and culture from the forests. The response of boreal forests to changes in the global environment - whether caused by direct human activity or by indirect changes such as the anticipated changes in climate - are therefore of considerable international interest, both for their policy implications and their scientific challenges. This book contains almost 50 peer-reviewed papers from a world-wide group of experts assembled under the auspices of IBFRA, the International Boreal Forest Research Association. Covering Forest Management, Biodiversity, Socioeconomics, Carbon Cycling, Climate Change and Advanced Technologies, this book should help stimulate further research and the development of constructive policies for improved managaement and conservation of global boreal forest resources. 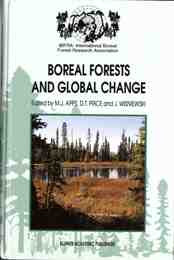