Intact and sectioned specimens were examined by using a light and a scanning electron microscope to determine the presence and spore morphology of inland spruce cone rust, Chrysornyxn pirolntn Wint., in Pyroln nsnrifolin Michx. plants and in white spruce, Picea glnucn (Moench) Voss, cones. Field observations of rust development and sporulation were made throughout the year. The microscope studies confirmed that C . pirolntn is systemic and perennial in shoots and connecting rhizomes of P. nsarifolia, indicating that one mode of fungus spread is between plants originating from the same rhizome. Sometimes, hyphae of C. pirolata occurred only at the nodes along part of a rhizome connecting diseased P. nsnrifolin plants. Springcollected buds from diseased P. asnrifolin contained C .pirolntn mycelium, but the fungus was not evident externally on current growth until the following spring. However, all leaves, especially those produced in the current year, on these plants were more upright and their upper surface less shiny. In some years, all P. nsnrifolin leaves in a locality bore mostly uredinia or telia; at other times about equal numbers of both were present on each leaf. About 6 weeks after telial production, spermogonia appeared on nearby spruce cones and about 4 weeks later these cones bore aeciospores on most scales of the systemically infected cones. Fruiting bodies and spores for each stage of the life cycle of the fungus are illustrated 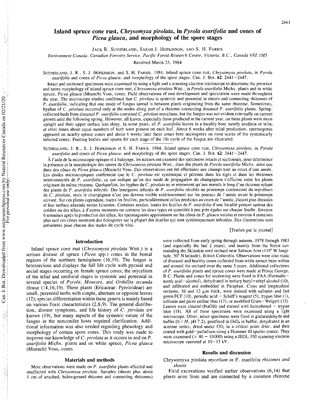