This study examines the relationship between seed production, soil scarification and seedling establishment in balsam fir (Abies balsamea [L.] Mill.) and white spruce (Picea glauca [Moench] Voss). It was conducted as part of a trial of natural regeneration following shelterwood cutting in a second-growth fir stand in the Lower St. Lawrence region. In fir, relatively good seed production occurs on a two-year cycle, whereas the seed production cycle of white spruce varies. In the absence of a buried seed bank, seed production plays a critical role in the success of natural regeneration. Scarification, and particularly the presence of the mineral soil component of the seedbed, has a very significant effect during seedling establishment in the two species. The seedling recruitment process is active for the first three years; this is followed by a high rate of seedling mortality and seedbed deterioration. Canopy opening, expressed by canopy transmittance, does not have a significant effect on seedling density or the height of dominant seedlings in the two species. The experiment shows that it is possible to increase the proportion of white spruce in the stand by synchronizing scarification with seed production.

Also available under the title:
Effect of seed production and soil scarification on the natural regeneration of a second-growth fir stand in the Lower St. Lawrence region (English) 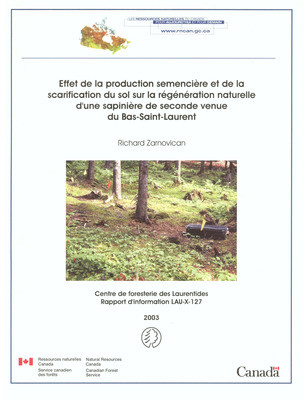