Variation at nuclear- and chloroplast-encoded microsatellite loci was studied among and within clonally propagated individuals of Eastern white pine. Total DNA was extracted and assayed from gamete-bearing tissue (megagametophytes) located on six different branch positions on each of 12 individual genets. No within-individual variation was observed among 12 loci studied. Estimates of numbers of mitotic cell divisions required to produce the tissue used as the source of genomic DNA were obtained by combining tree growth and anatomical data. This allowed for the calculation of upper bound estimates of numbers of mutations per locus per somatic cell division. The estimated somatic mutation rate was found to be substantially lower than those published for genomic microsatellite mutation rates in other plant species. 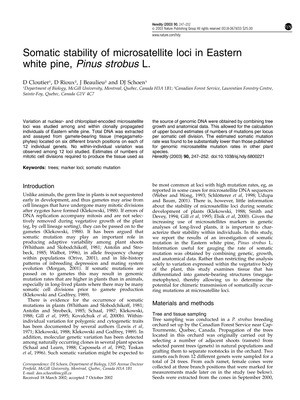