• In 2003, mountain pine beetle infested an area of over 4 million ha within British Columbia. Almost all of this infestation occurred within the pine forests of the Montane Cordillera Ecozone. • Other native insects and diseases with potential to cause economic harm have also shown population increases; provincial forestry agencies are monitoring these insects and diseases through annual surveys and controlling them through localized treatment programs. • Historically, fire was the major ecological influence in sustaining much of the forests of the Montane Cordillera. Fire suppression, which is necessary for the protection of forest resources, people, and prop erty, has resulted in ecological changes including • a dramatic increase in the Rocky Mountain (or interior) Douglas-fir component; • gradual replacement of some lodgepole pine forests, which rely on fire for regeneration, by Engelmann and white spruce or subalpine fir; and • reduced health of ponderosa pine ecosystems, which require frequent burning to be sustained. • The risk of a widespread wildfire is high because of increasing tree densities and fuel loads. For example, fuels have been accumulating for about 60 years in the Douglas-fir forests of southern British Columbia. • Invasive alien diseases and insects are an increased threat to the biodiversity of Montane Cordillera forests. Established alien species continue to cause mortality of native tree species. White pine blister rust, for example, is devastating western white pine, whitebark pine, and limber pine. Invasive aliens from outside the ecozone pose a constant risk through the unrestricted domestic movement of wood and forestry products. • Damage to forests from air pollution is largely nonexistent within this ecozone. 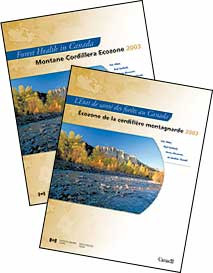