• Invasive alien insect and disease species are of increasing concern to the health and economic viability of the forest ecosystems within the ecozone. • Brown spruce longhorn beetle, an alien invasive found in Halifax in 1999, could threaten the ecological integrity of spruce forest ecosystems and trade. • Butternut is under attack by a new and potentially devastating disease and is now undergoing assessment by the Committee on the Status of Endangered Wildlife in Canada to determine whether it requires a species at risk designation. • Pine shoot beetle, a recent North American introduction from Asia, is capable of damaging all native pine species in Quebec, where the insect has been found, possibly leading to trade restrictions. • Beech bark disease, an insect–disease complex introduced 100 years ago, is killing mature trees in northern New Brunswick. • Dutch elm disease and white pine blister rust are well-established diseases that continue to devastate the health of white elm and eastern white pine, respectively. • Land use practices including forest harvesting over three centuries have changed forest composition, dramatically decreasing the frequency of some tree species such as red oak in Quebec and bur oak and eastern white-cedar in the Maritime provinces and increasing frequency of others such as balsam fir, red maple, and trembling aspen in some parts of the ecozone. There is a direct causal relationship between deteriorating air quality (increased ozone concentrations, increased acid loading) and increased mountain paper birch decline, particularly along the Bay of Fundy coast. • Climate change is forecast to increase climatic extremes which, in turn, affect forest health through, for example: • increased blowdown • more frequent ice storms • winter damage due to prolonged thaw which weakens trees • enhancing the survival and establishment of some invasive alien pests originating from southern areas. 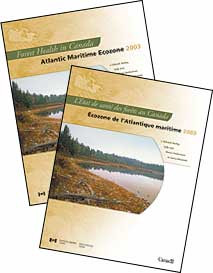