Field data from outbreaks of the spruce budworm, Choristoneura fumiferana (Clem.) (Lepidoptera: Tortricidae), in Ontario and Quebec show that current-year defoliation is the single greatest determinant of variation in fecundity. The species of tree that served as the foodplant and infections by the microsporidian Nosema fumiferanae (Thomson) (Microsporida) had little effect on mean lifetime fecundity in field populations. During a prolonged outbreak at one location (Black Sturgeon Lake, Ontario), annual lifetime fecundity was inversely related to observed defoliation in the same year, with the highest mean fecundity recorded at the beginning and the end of the outbreak when defoliation was least severe. The overall trend in yearly rate of change in egg density in a population time series at Black Sturgeon Lake was associated more closely with generational survival than with fecundity. Measured fecundity of local moths was greater than estimated per capita rates of recruitment in most years of the outbreak at Black Sturgeon Lake. This suggests that in these years of the outbreak at Black Sturgeon Lake there was a net emigration of egg-carrying moths. 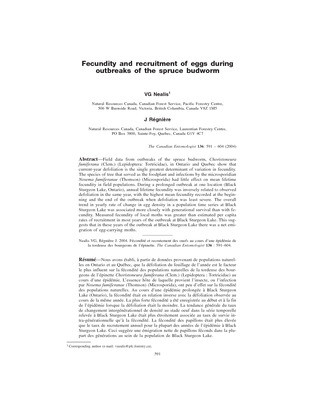