The sequence of events leading to necrophylactic periderm formation was studied throughout the year following abiotic wounding to the non-infected roots of 10- and 27-year-old western larch and 11- and 25-year-old Douglas-fir trees infected with Armillaria ostoyae in the southern interior of British Columbia. The sequence was the same for both ages and species of trees. Wound repair was more rapid in the summer compared to the spring and autumn. Following cell hypertrophy, a zone of lignified impervious tissue was in the initial stages of formation within 10 days of wounding in the summer and 14 days in the spring or autumn. The new phellogen had produced 3-4 rows of phellem cells after 20 days in the summer or 40 days in the spring. Modified cells abutting the inner boundary of the impervious zone frequently developed thick lignified abaxial walls and thin suberized adaxial walls. A typical exophylactic periderm in healthy root bark tissue of both western larch and Douglas-fir consisted of a single band of stone phellem 1-4 cells wide, a single band of thin-walled phellem 3-6 cells wide in western larch and 2-3 cells wide in Douglas-fir and 1-3 rows of phelloderm cells. Mature thin-walled phellem cells had pigmented contents, red in western larch and light brown in Douglas-fir. In response to wounding, 27-year-old western larch developed necrophylactic periderms with between 4-6 extra rows of phellem and 25-year-old Douglas-fir between 9-12 extra rows of phellem when fully developed. Fifty days following wounding in the summer 1-3 rows of stone phellem were observed in the necrophylactic periderm of 10-year-old trees. When fully developed, the necrophylactic periderm in 27-year-old western larch had developed 3-5 rows of stone phellem. Stone phellem development was only sporadic in 25-year-old Douglas-fir and was not observed in 11-year-old trees. Wounds performed in the winter showed no signs of activity associated with repair until dormancy broke in the spring. 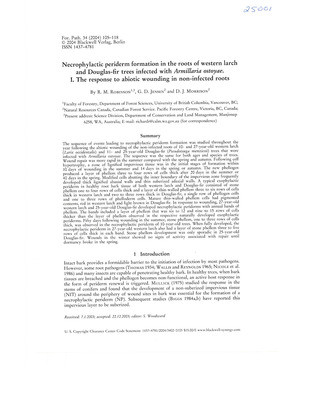