In western North America, Douglas-fir (Pseudotsuga menziesii) is the most economically important conifer species susceptible to laminated root rot caused by Phellinus weirii. While attempting to internally sequence an endochitinase found to be up-regulated in P. weirii-infected Douglas-fir roots, we obtained overlapping peptide fragments showing 28% similarity with a PR-5 thaumatin-like protein (TLP) designated PmTLP (Pm for Pseudotsuga menziesii). A rabbit polyclonal antibody was reared against a synthetic peptide composed of a 29-amino-acid-long, conserved, internal sequence of PmTLP and purified by immunoaffinity. Western immunoblot analysis of infected roots of 24-year-old coastal Douglas-fir showed significantly higher amounts of PmTLP (P < 0.01) closest to the point of P. weirii inoculation and infection than in uninfected regions of the same root. The antibody was also used to screen for PmTLP in roots of 25-year-old interior Douglas-firs naturally infected with a related pathogen, Armillaria ostoyae, and results showed significantly higher levels of PmTLP in bark tissues adjacent to infection (P < 0.05) than in uninfected tissue. Using polymerase chain reaction (PCR)-based cloning, the cDNA of PmTLP was shown to have a 702-bp open reading frame with a signal peptide cleavage site at 155 bp corresponding to a 29-amino-acid-long residue prior to the start of the N-terminal. Based on the deduced amino acid sequence, the molecular mass of the putative PmTLP was calculated to be 21.0 kDa with an isoelectric point of 3.71. Alignment analysis of PmTLP cDNA with a representative genomic DNA PCR sequence showed presence of one intron of variable size, within the coding region. The induction of PmTLP at the site of root infection and its presence in needle tissue suggests a general role for this protein in adaptation to stress and may be part of an integrated defense response initiated by the host to impede further pathogen spread. Additional keywords: ectotrophic mycelium, defense-related protein, mass spectrometry analysis. 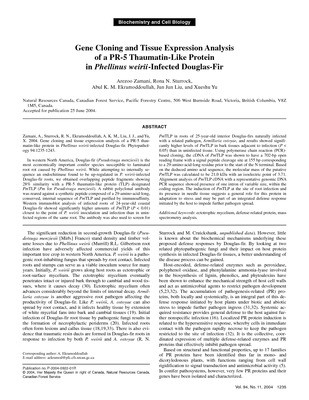