Antibodies to detect pectin in present investigations attached to distinct fibrils in vessel lumina. In carnation infected with an isolate of Fusarium oxysporum f.sp., labeling of pathogen cells also occurred; in a resistant cultivar (cv.), it was coincident with proximate pectin fibrils and linked to altered fungal walls, which was the opposite in the susceptible cv., indicating that hindrance of pathogen ability to degrade pectin may be related to resistance. Labeling of the fungus in culture was nil, except in media containing pectin, showing that pectin is not native to the pathogen. Labeling of fungal walls for cellulose in elm (inoculated with Ophiostoma novo-ulmi) and carnation also occurred, linked to absorbed host wall components. The chitin probe often attached to dispersed matter, in vessel lumina, traceable to irregularly labeled fungal cells and host wall degradation products. With an anti-horseradish peroxidase probe, host and fungal walls were equally labeled, and with a glucosidase, differences of labeling between these walls were observed, depending on pH of the test solution. Fungal extracellular matter and filamentous structures, present in fungal walls, predominantly in another elm isolate (Phaeotheca dimorphospora), did not label with any of the probes used. However, in cultures of this fungus, extracellular material labeled, even at a distance from the colony margin, with an anti-fimbriae probe. 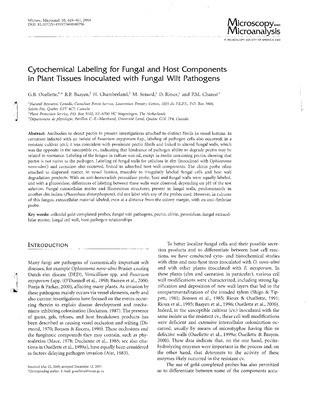