The aim of this paper is to present an overview of the research work carried out in eastern Canada over the last 50 years to increase knowledge of the genetics of eastern white pine (Pinus strobus L.), the most majestic conifer of eastern Canada. The intent of the paper is also to describe the accomplishments achieved in breeding and tree improvement by a number of private and public sector organizations from different eastern Canadian provinces as well as the activities that are currently underway. Ontario’s program, which has been cancelled but which comprised the production of interspecific hybrids from rust-resistant species such as Himalayan white pine (P. wallichiana A.B.Jackson), is briefly described. Results of recent studies of population structure of eastern and western North American blister rust (Cronartium ribicola J.C. Fisher) are reported. Estimated genetic gain for height 10 years after plantation from a network of three provenance-progeny tests established in Quebec is presented with the origin of the most promising progenies. Other related subjects such as white pine weevil, flower induction, somatic embryogenesis and seed orchard production are discussed. Finally, work presently being carried out for in situ and ex situ conservation of genetic resources of eastern white pine in eastern Canada are summarized. 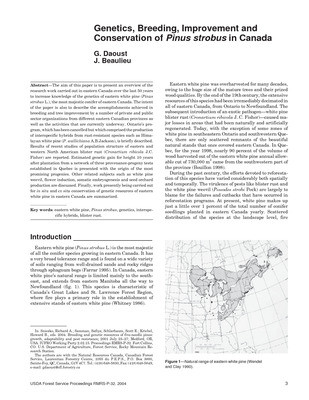