The terpene composition of current-year buds of Douglas-fir, Pseudotsuga menziesii (Mirb.) Franco, was analyzed from before budburst to after buds were fully flushed. Terpene composition was measured at weekly intervals for several seasons at eight different locations in the southern interior of British Columbia, Canada. Discriminant functions relating terpene composition to suitability of buds for newly emerged western spruce budworm, Choristoneura occidentalis Freeman, were developed based on terpene profiles of the buds and bioassays measuring the suitability to budworms of a sister group of buds. Changes in percent composition of bud terpenes before and during budburst were closely associated with changes in the suitability of the buds to utilization by budworms at both the tree and site by date levels. Use of a degree-day scale for bud suitability removed much of the year-to-year variation, but remaining differences among sites suggest additional sources of variation influencing the insect-host plant relationship. The success of correctly classifying bud suitability using terpene profiles demonstrates the value of foliar terpenes as indicators of seasonal changes in suitability of Douglas-fir foliage during the critical spring emergence period of western spruce budworm. This indicator could be used to screen individual trees susceptible to budworm damage and identify sites at high risk of damaging defoliation. 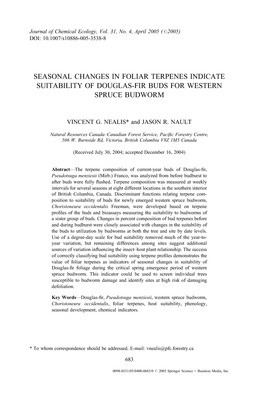