The Clay Belt region of Quebec and Ontario supports a large forest resource and an important forest industry. In this region, the majority of the harvested volume allotted to forest companies is in forested peatlands and boreal forests prone to paludification. Paludification is the accumulation of organic matter over time, and is generally believed to be caused by increasing soil moisture and Sphagnum colonization. Paludification is influenced by external and internal factors; it reduces soil temperature, decomposition rates, microbial activity, and nutrient availability. As a result, paludification may lead to lower site productivity with time after disturbance. Therefore, in harvested stands with a thick organic matter layer, low soil disturbance (as opposed to fire) and water table rise may create favourable conditions for paludification that may ultimately be detrimental to timber production. Past experiences suggest several solutions to prevent or control the negative effects of paludification. Drainage and fertilization applied together are generally good techniques to control paludification and to improve tree productivity. On the other hand, we suggest that site preparation as well as prescribed burning, preceded or not by drainage, are avenues of research that deserve to be explored because they hold the potential to control or even reverse paludification, especially where peat accumulation is caused by natural succession or where lateral peat expansion has occurred. 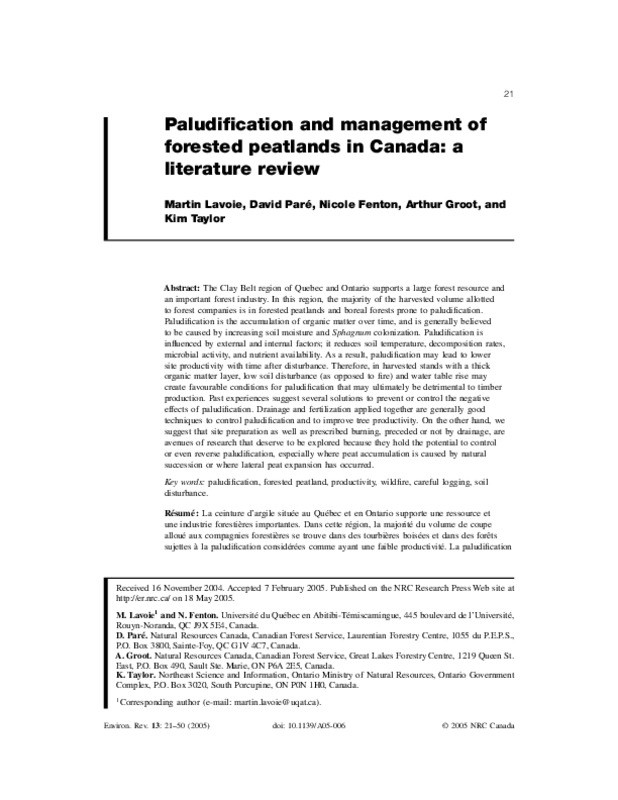