In an effort to meet the stringent requirements towards registration of microorganisms as biopesticides, several molecular techniques were tested as part of a strategy to develop a quality control system for Pseudozyma flocculosa, the active ingredient of Sporodex, a biofungicide used for the control of powdery mildew fungi. In the first approach, multiplex PCR fingerprints generated by three sets of primers allowed differentiation of several isolates of P. flocculosa from closely related species, or genera such as Tilletiopsis. The same set of primers was used in quality control experiments and revealed fungal contamination that was otherwise not observed by standard culture and microscopy techniques. In addition, the use of random amplified microsatellites generated by (GT)n and (CCA)n primers was applied as a measure of possible genetic variation over 65 repeated subcultures of P. flocculosa. Finally, a novel technique was developed and named reverse intron PCR (RIP), based on the presence of an intron revealed by partial sequencing of mtLSU of P. flocculosa. RIP allowed not only differentiation of P. flocculosa from other species but also separated the isolates of different origins within P. flocculosa. This new technique could find useful applications in phylogenetic studies of closely related fungal species and isolates. 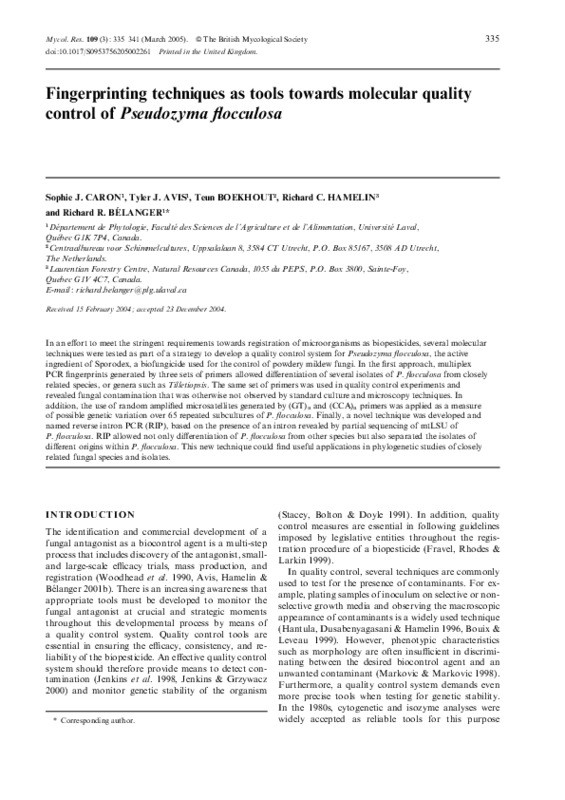