The Interprovincial Forest Fertilization Program comprises 79 standardized experiments established by the provincial forest services of New Brunswick, Quebec, Ontario, Manitoba and Alberta, and by the Canadian Forestry Service in the provinces of Nova Scotia and Saskatchewan. The experiements were designed to test the effects of nitrogen and of combined nitrogen and phosphorus, nitrogen and potassium, and nitrogen, phosphorus and potassium treatments on the growth of conifer stands.

Thirty of the 79 installations were remeasured in 1973 and 1974, and 5-year periodic increments and fertilization responses were determined and presented in a published report. A second set of 23 installations was remeasured and evaluated in 1975; the results were published. This report presents the 5-year growth results of a third set of 17 installations, fertilized in 1972 and remeasured in 1976. The set comprises 10 jack pine stands (3 in Quebec, 6 in Ontario and 1 in Saskatchewan), 4 black spruce stands, 1 mixed jack pine and black spruce stand and 2 balsam fir stands (all in Quebec).

Fertilization did not result in statistically significant growth improvements in the Saskatchewan jack pine stand. 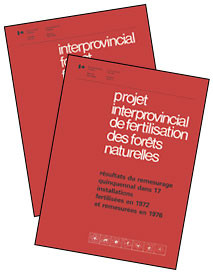