Magnificent coniferous forests cloak all but the highest peaks and most arid interior valleys of British Columbia. Conifers are dominant in each of the province's varied forest ecosystems, from the warm temperate coastal rainforest to the subarctic boreal forest. They also grow as scattered individuals even in the harsh environments of the South Okanagan's Great Basin desert and in high-elevation alpine meadows that are buried in deep snows for much of the year. Of the 32 species of conifers native to Canada, all but seven occur in British Columbia. Conifers account for more than 90 percent of the province's forest cover and contribute significantly to the province's economic health and aesthetic appeal.

This book is about the forest defoliators-insects that consume conifer foliage- that live within these forests. It provides near-comprehensive coverage of the coniferfeeding caterpillars and sawfly larvae of British Columbia, presented in a userfriendly, photographically illustrated format. Larval descriptions, life history data, color photographs and a photographic key are provided to help users identify any defoliator occurring on a coniferous host in British Columbia, and quickly locate information on the distribution, hosts, biology, abundance, feeding habits, and economic impact of each species in this important group of insects.

These insect-defoliators are important elements of forest health and biodiversity. Some species periodically go into outbreak, and denude thousands of hectares of forests, reduce the forests' aesthetic and recreational appeal, and may cause considerable economic loss to the forest resource through lost growth and tree mortality. Other species are rare and may require conservation efforts. All play important ecological roles in the forest. The 175 species of forest defoliators described herein include almost all the species known to feed on conifers in British Columbia.

Financial support was provided by the Forest Investment Account of the Government of British Columbia, Forest Science Program. 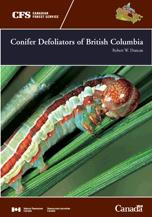