Roughly 18,000 years ago, a thick layer of ice covered all of Canada and the northern part of the United States. Most plant and animal species succumbed to the ice, and those that survived were confined to areas south of the ice front. As the climate warmed up, they began to spread northward, gradually building groups of populations that collectively form their present-day geographic range.

Also available under the title:
Uncovering the post glacial history of conifer populations. Branching out from the Canadian Forest Service, Laurentian Forestry Centre. No. 27. (English) 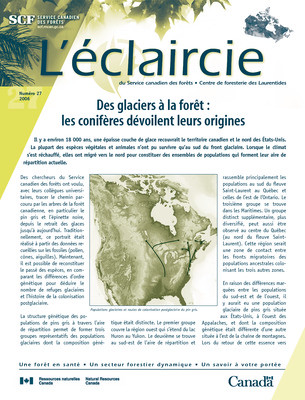