Introduction: This report is an annotated bibliography on the ecological effects of fire on fauna, flora, soil, water, and microclimate in the Boreal and Great Lakes-St. Lawrence Forest Regions of Ontario and adjacent areas (i.e., eastern Manitoba, northern Minnesota, Isle Royale in Michigan, and western Quebec). It includes published literature as well as important unpublished reports. In some cases, author’s abstracts, summaries, conclusions, or selected passages were excerpted. Many reports, especially reports before 1980, were annotated to be included in the bibliography. The focus of this bibliography is on fire effects in natural forest stands. Fire impact in cut-over stands (McRae et al. 2001) is not covered, nor are the biological and silvicultural effects of broadcast slash burning (e.g., McRae 1979). The report is patterned after Schrige and Penderis (1978) in which a specific geographical area is covered. It is intended to be a handy reference for Ontario land managers, researchers, educators, and university students. It includes several references on fire effects that came from Drysdale et al. (1974). His report originated from a joint Canada-Ontario research committee and was the first recorded attempt to pull together references on fire effects in Ontario. 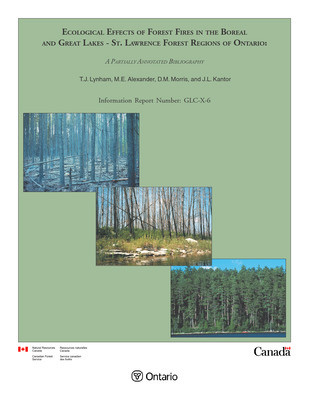