Four 10-ha plots located in Kamloops Forest District, British Columbia, containing Douglas-fir trees infested with Douglas-fir tussock moth were aerially sprayed with nuclear polyhedrosis virus (Virtuss) in 1982 when most larvae were in the first instar. A dosage of 2.5 x 1011 polyhedral inclusion bodies (PIB) per hectare was applied in an emulsifiable oil tank mix to one plot and the same dosage in an aqueous tank mix containing molasses was applied to a second plot. The remaining two plots were treated with dosages of 8.3 x 1010 and 1.6 x 1010 PIB per hectare, respectively, in the oil mix. The treatments were applied with a fixed-wing aircraft fitted with boom and nozzle equipment and calibrated to deliver 9.4 L/ha. A further four plots were selected as checks.

Population reduction at 6 weeks post-spray (calculated using a modified Abbott's formula) was 65% in the plot receiving the lowest dosage and from 87 to 95% in the remaining three plots. Incidence of virus infection, determined microscopically, peaked at 5-6 weeks post-spray with 85-100% of the larvae scored as positive. Levels of naturally occurring virus remained low in the check plots. Adult emergence from the pupae collected in the treated plots ranged from 4 to 19% and from 28 to 43% in the check plots. Reduction in egg-mass density attributed to the treatments was 97% in one plot, 99% in two others, and not determined for the fourth.

A virus dosage of 8.3 x 1010 PIB per hectare, which is one-third of the previously recommended dosage, is adequate, and either tank mix is acceptable. 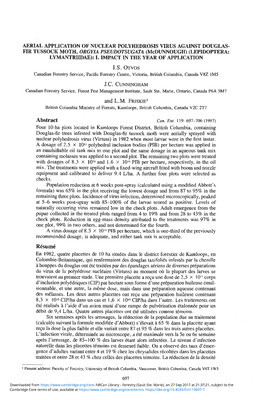