Following aerial application of a Douglas-fir tussock moth, Orgyia pseudotsugata (McDunnough), nuclear polyhedrosis virus (NPV) product called Virtuss on four plots in 1982, observations were made to determine the impact of these treatments in 1983 and 1984. Treated plots as well as buffer zones between and adjoining the treated plots, and three of the four check plots established in 1982, were monitored. The NPV appeared to have spread from the treated plots to adjoining areas in 1982, effectively reducing the Douglas-fir tussock moth population. This observation suggests that a strategy of spraying alternate swaths of Douglas-fir tussock moth infested stands with this viral insecticide may effectively initiate an epizootic that would control the population at a reduced cost. 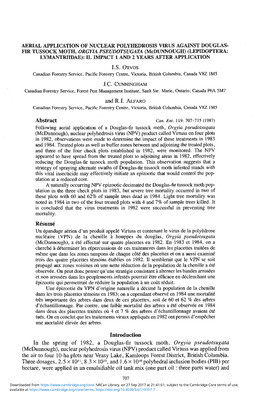