Twenty-two clearcut areas were sampled in central British Columbia using the line intersect method to: (a) determine the density and bark area of stumps and logs susceptible to attack by the spruce beetle, Dendroctonus rufipennis (Kirby), (b) calculate sample sizes for a predetermined degree of precision, and (c) develop new estimating procedures based on counts of intersected pieces. Estimates based on line intersect sampling were compared with estimates based on fixed plot sampling. The mean density (173.6) and mean bark area (161.6 m2) per hectare of stumps was 12.2 and 3.9 times greater than the corresponding means for logs and tops. There were no statistically significant differences between the line intersect and fixed plot samples in estimates of either mean density or mean bark area per hectare of stumps, and variances were strongly related to means. Using line transects, less sampling time was required to estimate mean stump density and mean stump bark area per hectare with a half confidence belt equal to 0.2 (mean) than using fixed plots. Equations to estimate piece density and bark area per hectare based on counts of intersected pieces are presented. 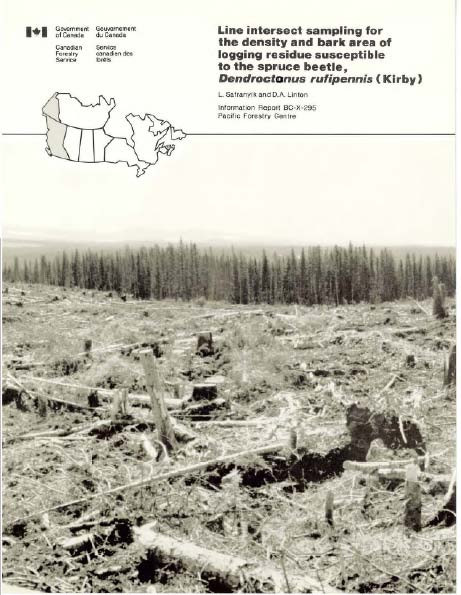