While focus on invasive alien species has been primarily on the economic and human health aspects, invasive alien species are the most significant threat to biodiversity after habitat loss and fragmentation. Many feel that the impacts from invasive species are irreversible in the environment, as alien species permanently modify habitats, hybridize with native species, and disrupt the natural interactions among species that determine key functions in forest ecosystems. Typically, with no natural enemies to suppress them in their newly invaded areas, alien species can reduce or eliminate native species by outcompeting them for resources, through predation or by inflicting disease. Invasive alien species may also have indirect impacts by modifying ecosystem processes such as fire. Fire management may increase the invasive potential for some organisms but invasion by alien species may also alter natural fire regimes. As a result of such ecological interactions, the potential impacts of invasive alien species are difficult to predict and are often cumulative. Although Canadian forest ecosystems are dynamic and adapted to change, the abrupt and unprecedented disturbances that result from invasive species have unique and far-reaching consequences for the ecosystem services provided by these forests, causing irreversible ecological damage and incalculable economic impacts. 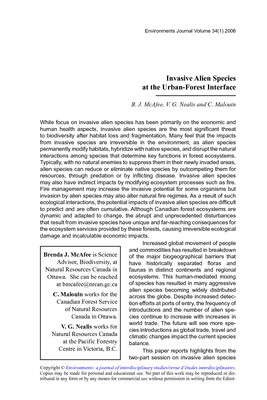