Despite ecological and management importance, little is known about the effect of forest landscape structure on the spread of mountain pine beetles (Dendroctonus ponderosae Hopkins). The general prediction from published literature is that forest fragmentation at some scale might slow the spread of infestations. However, mountain pine beetle dispersal ecology is complicated by requirement for attack en masse and a pheromone-based communication system that facilitates this aggregation process. One interesting possibility is that infestations might spread more slowly over habitat gaps across which beetles cannot communicate. To investigate this possibility, we develop an individual-based model of mountain pine beetle dispersal, aggregation and attack, and perform simulation experiments to explore the effects of habitat patch size, habitat compaction, communication distance, and flight behaviour on the spread rate and final extent of infestations. The model is based on a spatially explicit mountain pine beetle model developed by Powell et al. (1996, Mathematical elements of attack risk analysis for mountain pine beetles. Journal of Theoretical Biology 204(4): 601-620), but differs from that model on several points.

Increasing the distance between patches does slow infestation spread, though not as much as expected. When we remove the tendency of beetles to fly for some period before becoming receptive to pheromones (free flight), patch size becomes important and spread rate only varies with habitat compaction when patch size is small. At face value, the prediction is that beetles will be somewhat sensitive to forest fragmentation at small scales, but insensitive to variation in patch size because of their free flight behaviour. This result is subject to uncertainty about model form and parameterization. More robust aspects of this work include a review of the potential effects of relatively small-scale spatial structure on aggregating organisms, a comparison of diffusion and individual-based modeling approaches, and consideration of some assumptions underlying this and preceding mountain pine beetle models. 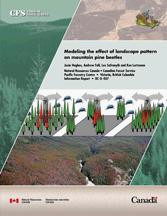