Spring-felled logs of Douglas-fir, Pseudotsuga menziesii (Mirb.) Franco, and western hemlock, Tsuga heterophylla (Raf.) Sarg., were attacked by ambrosia beetles, Trypodendron lineatum (Oliv.), in the year after felling. By monitoring individual galleries it was determined that brood production was similar to that found in fall- and winter-felled logs. The sex ratio of the brood did not differ significantly from 1:1. Only beetles that had failed to establish successful galleries emerged during the "second" flight period. Significant linear relationships were found between frass weight and each of the following variables: number of egg niches, emerged adult progeny, and gallery length. Mortality in galleries in Douglas-fir and western hemlock logs, respectively, was found to be 9.4 and 12.4% between the egg and larval–pupal stage and 19.5 and 32.1% between the larval–pupal and adult stages. 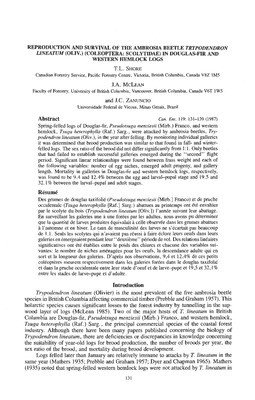