Beginning in about 1990, populations of spruce beetle, Dendroctonus rufipennis Kirby (Coleoptera: Scolytidae), reached epidemic levels and began killing drought-stressed white spruce, Picea glauca within Kluane National Park and Reserve in the southwest Yukon.
By 1994, when the infestation was first discovered, the beetle had already killed spruce over an area of 32 000 ha and had moved from the Alsek River drainage within the park into public forest lands and First Nations settlement lands within the Shakwak Trench north of Haines Junction. In 2000, while the infestation continued to expand, a decision was made to establish a network of plots within infested stands to assess and document the changes that were occurring to the treed overstory and understory, as well as to the associated flora. Also, in response to the greatly increased fire hazard posed by the beetle-killed trees, tree crown and surface fuels were analyzed and a relative fire hazard rating system was developed. From 2000 to 2003, 27 plots were established in the Alsek River drainage within Kluane National Park, the Shakwak Trench from Congdon Creek in the north to Klukshu Village in the south and east within the Dezadeash River Valley as far as Canyon. A supplementary root disease assessment was completed within selected plots in 2003. As of the date of this report, spruce beetles are still killing trees over large areas, with an accumulated area of infestation in excess of 350 000 ha, and trees are still dying within some of the plots. This establishment report summarizes the findings from the first round of assessments and will serve as a baseline against which later assessments will be compared. To realize the full intent of the project, the second round will be completed some years after the collapse of the beetle infestation when the trees have begun shedding their fine fuels. This will allow the stands to begin adjusting to the loss or partial loss of the white spruce overstory, and increased light penetration to the forest floor will have begun to stimulate a response in the treed understory and the surface vegetation. 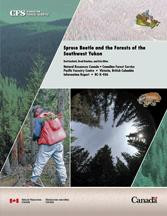